The plunge in share markets over the last week has generated much coverage and consternation. This is understandable given the rapidity of the falls – with US shares having their fastest 10% fall from an all-time high on record - and the uncertainty around the coronavirus (Covid-19) and its impact on economic activity. From their highs to ...

After big falls shares have become technically oversold, measures of negative investor sentiment such as the VIX (or fear) index and demand for option protection have spiked. So, shares could have a short-term bounce. But given the uncertainties around Covid-19 – with more cases in the US and Australia likely to pop up - the situation could get worse before it gets better, so the share pullback could have further to go - notwithstanding short-term bounces.

Sharp market falls with headlines screaming that billions of dollars have been wiped off the share market are stressful for investors as no one likes to see the value of their investments decline. The current situation is doubly stressful because of fears for our own and others health – particularly for the elderly. However, several things are worth bearing in mind:

First, while they all have different triggers and unfold a bit differently to each other, periodic corrections in share markets of the order of 5%, 15% and even 20% are healthy and normal. For example, during the tech/dot-com boom from 1995 to early 2000, the US share market had seven pull backs greater than 5% ranging from 6% up to 19% with an average decline of 10%. During the same period, the Australian share market had eight pullbacks ranging from 5% to 16% with an average fall of 8%. All against a backdrop of strong returns every year. During the 2003 to 2007 bull market, the Australian share market had five 5% plus corrections ranging from 7% to 12%, again with strong positive returns every year. More recently, the Australian share market had a 10% pullback in 2012, an 11% fall in 2013 (the taper tantrum), an 8% fall in 2014, a 20% fall between April 2015 and February 2016, a 7% fall early in 2018, a 14% fall between August and December 2018 and a 7% fall into August last year. And this has all been in the context of a gradual rising trend. And it has been similar for global shares – with the last big fall in US shares being a 20% plunge into Christmas eve 2018. See the next chart. While they can be painful, share market corrections are healthy because they help limit a build-up in complacency and excessive risk taking. 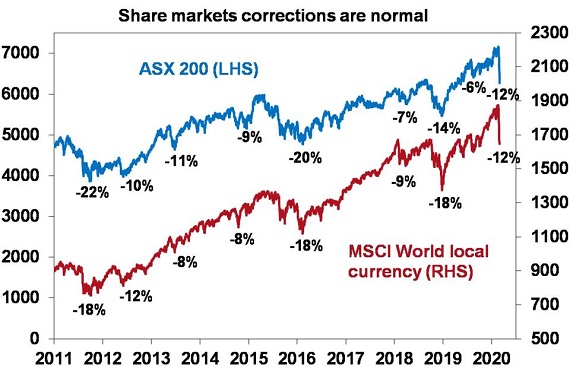 Related to this, shares climb a wall of worry over many years with numerous events dragging them down periodically, but with the long-term trend ultimately up & providing higher returns than other more stable assets. Bouts of volatility are the price we pay for the higher longer-term returns from shares. 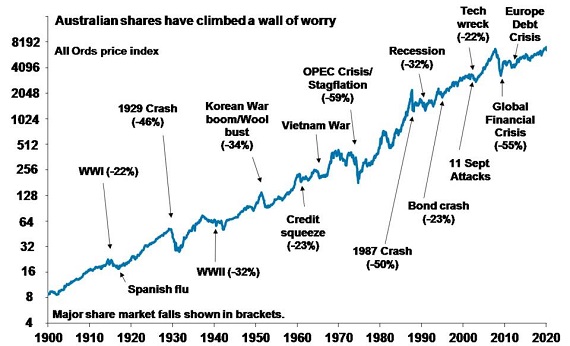 Second, the main driver of whether we see a correction (a fall of 5% to 15%) or even a mild bear market (with say a 20% decline that turns around relatively quickly like we saw in 2015-2016) as opposed to a major bear market (like that seen in the global financial crisis (GFC)) is whether we see a recession or not – notably in the US as the US share markets tends to lead for most major global markets. The next table shows US share market falls greater than 10% since the 1970s. I know it’s heavy – but I like this table! The first column shows the period of the fall, the second shows the decline in months, the third shows the percentage decline from top to bottom, the fourth shows whether the decline was associated with a recession or not and the fifth shows the gains in the share market one year after the low. Falls associated with recessions are highlighted in red. 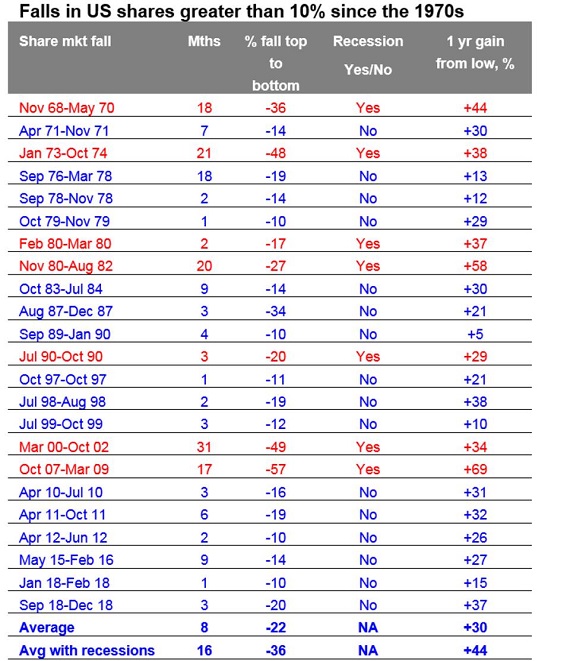 So, whether a recession is imminent or not in the US is critical in terms of whether we will see a major bear market or not. In fact, the same applies to Australian shares. Our assessment is that a US/global recession is not inevitable. We have not seen the excesses – in terms of overall debt growth (although housing debt is a source of risk in Australia), overinvestment, capacity constraints and inflation – that normally precede recessions in the US, globally or Australia. And we have not seen the sort of monetary tightening that leads into recession. In fact, monetary conditions remain very easy. However, the uncertainty around the coronavirus outbreak and the likelihood of economic shutdowns designed to contain it beyond those in China do suggest a greater than normal risk on this front. That said even if there were a recession growth would likely rebound quickly once the virus came under control as economic activity sprang back to normal helped by policy stimulus.

Third, selling shares or switching to a more conservative investment strategy or superannuation option after a major fall just locks in a loss. With all the talk of billions being wiped off the share market, it may be tempting to sell. But this just turns a paper loss into a real loss with no hope of recovering. The best way to guard against making a decision to sell on the basis of emotion after a sharp fall in markets (as many including me are tempted to do!) is to adopt a well thought out, long-term strategy and stick to it.

Fourth, when shares and growth assets fall, they are cheaper and offer higher long-term return prospects. So, the key is to look for opportunities the pullback provides – shares are cheaper and some more than others. It’s impossible to time the bottom but one way to do it is to average in over time.

Fifth, while shares have fallen, dividends from the market haven’t. They will come under some pressure as the economy and profits take a hit from a deeper and longer coronavirus outbreak. But companies like to smooth their dividends over time – they never go up as much as earnings in the good times and so rarely fall as much in the bad times. So, the income flow you are receiving from a well-diversified portfolio of shares is likely to remain attractive, particularly against bank deposits. 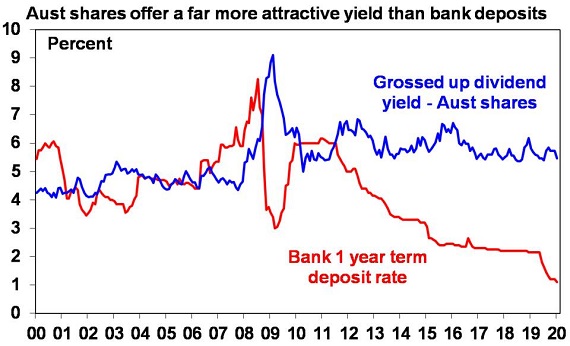 Sixth, shares and other related assets often bottom at the point of maximum bearishness, ie, just when you and everyone else feel most negative towards them. So, the trick is to buck the crowd. “Be fearful when others are greedy. Be greedy when others are fearful,” as Warren Buffett has said.

Finally, turn down the noise. At times like this, negative news reaches fever pitch. Talk of billions wiped off share markets and warnings of disaster help sell copy and generate clicks & views. But we are rarely told of the billions that market rebounds and the rising long-term trend in share prices adds to the share market. Moreover, they provide no perspective and only add to the sense of panic. All of this makes it harder to stick to an appropriate long-term strategy let alone see the opportunities that are thrown up. So best to turn down the noise.

Oliver's Insights
back to top