Shares climb a "wall of worry" - but is it sustainable?

After a roughly 35% plunge from their February high point to their lows around 23 March on fears regarding of global recession on the back of the coronavirus shutdowns, share markets have since rebounded sharply, led by US shares. The rally has pushed the Australian ASX 200 ...

back through 6000 for the first time since March.

A common concern is that the rebound in share markets is “too optimistic” and “irrational” – how can share markets rebound so rapidly when economic conditions are so weak, coronavirus uncertainty remains high, the US is seeing civil unrest and US/China tensions are rising? I must admit that I have also been surprised by the speed of the rebound and think maybe the markets are ahead of themselves. But I have seen this happen before and it reminds me of the quotation from the investor Sir John Templeton “bull markets are born on pessimism, grow on scepticism, mature on optimism and die of euphoria” as this rally has occurred against a lot of pessimism with shares climbing a wall of worry. But as the quote reminds us, that’s what they often do. The plunge in shares into March led the coronavirus hit to activity & fear of recession on the way down and in the process surprised many at the severity of the fall and now it’s led on the way up despite still lots of worries.

Key drivers of the rally

So what’s driven the rally? In early April we listed signposts to watch as to whether shares have bottomed. The key signposts are updated in this table. 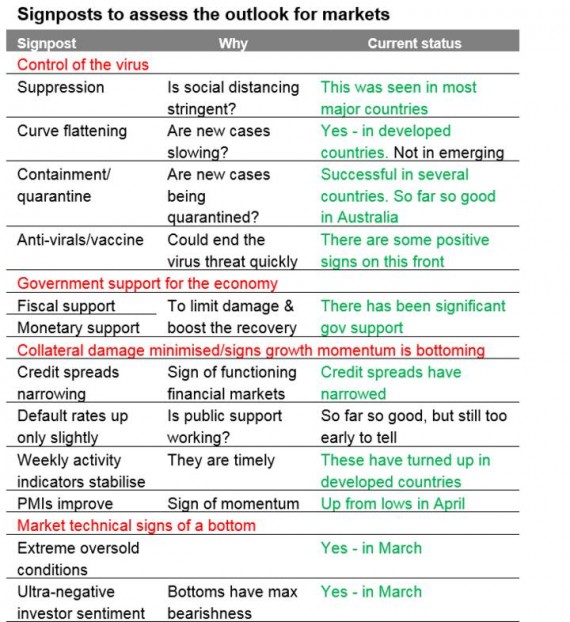 Virtually all of the signposts now tick off positively for developed countries. These are highlighted in green. So, put simply the rebound in shares has been driven by a combination of: 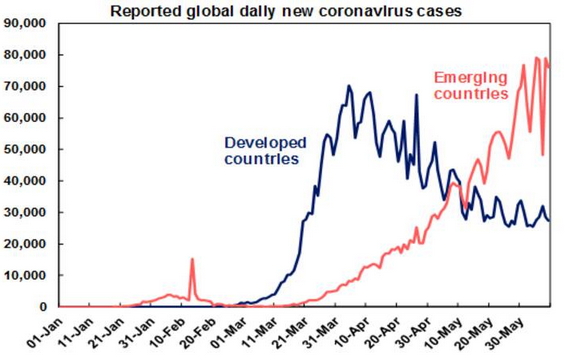 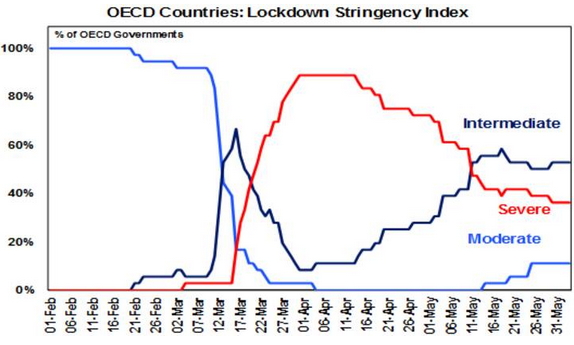 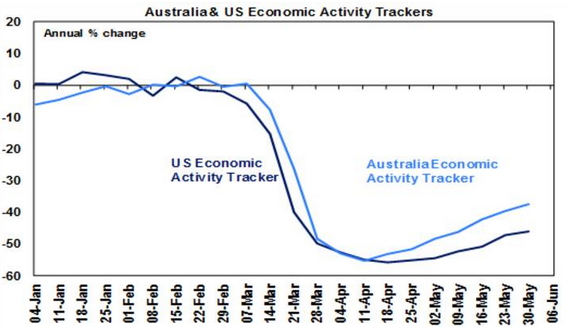 These considerations have simply swamped concerns about civil unrest in the US (which now appears to be settling down anyway) and US-China tensions.

Confirmation from other markets

It’s not just shares that have rebounded as the rally has been confirmed by other growth sensitive assets/yields. In particular:

So why has the US share market led on the way up?

The US share market has a relative high exposure to tech and health care stocks that have been key beneficiaries of the coronavirus shock, Amazon is now 55% of retail stocks’ market capitalisation and the US has also seen more money printing or QE by the Fed compared to other countries including Australia. By contrast, non-US and Australian shares are more cyclical – but should start to benefit as the recovery continues.

After huge rallies most shares are technically overbought which could mean we see a correction over the next few months. But many shares in many share markets are at overbought extremes often seen in the aftermath of major bear market lows and this augurs well for returns on a 6-12 basis.

But what about the slump in earnings?

Earnings are taking a big hit from the impact to economic activity and this has seen earnings estimates slump and price to earnings multiples surge. This is clearly a concern but note a typical “cyclical” rebound in shares goes through three phases.

Right now, we are nearing the end of Phase 1. As economic conditions recover profits are likely to strengthen and we will move into Phase 2. While PEs are now high, it’s noteworthy that the equity risk premium which can be crudely measured as the gap between earnings yields (using forward earnings) and bond yields is still reasonable reflecting ultra-low bond yields. But an improvement in earnings will be a key thing to watch for. What are the key risks?

The three big risks are: a second wave of coronavirus cases (which should be able to be avoided with lots of testing, tracking and quarantining and even if it does occur may not have the same negative economic impact as any renewed lockdown is likely to be milder and deaths are likely to be lower given greater preparedness); collateral damage from the shutdowns resulting in a delayed or very slow recovery as bankruptcies surge and unemployment goes higher (so far so good – with government and central bank support hopefully heading this off); and risks around the US election (such as Trump ramping up tensions with China if he feels he has nothing to lose or investors fretting about higher taxes and more regulation under a Democrat victory across the Presidency, House and Senate).

Shares are vulnerable to a short-term consolidation or pullback. But if we are right and April was the low in economic conditions then shares are likely to be higher on a 6 to 12-month horizon. The experience of the last few months highlights just how hard it is to time market bottoms – a good approach for long-term investors is to average in over several months after major falls.

Oliver's Insights
back to top